Are Microsoft Teams & Skype for Business about to merge? | Lineal IT 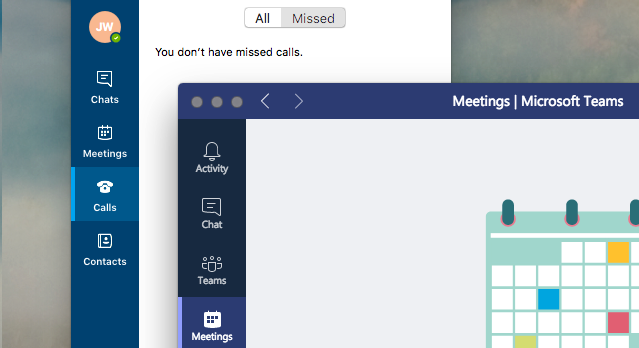 Are Microsoft Teams and Skype for Business about to merge?

Teams and Skype for Business – Microsoft’s two key communication applications may be about to merge, following a series of leaked hints from the Office 365 message centre.

Microsoft Teams – Redmond’s answer to easy-use messaging and group sharing apps for business (think Slack, or Basecamp) that have seen massive growth in popularity, already looks visibly similar to the Skype for Business client on Mac, and it’s easy to imagine the two becoming a single, powerful unified communications product.

Quite whether Skype for Business or Teams would be cut is an interesting dilemma. Despite a slow start, Skype for Business has proved very successful in the telecoms world – expanding to cover video conferencing, Outlook calendar integration and other established business functions, whilst Teams is still in its early stages.

Microsoft Teams though is clearly closer in concept and execution to the ‘appy’, casual platforms that, quite frankly, Microsoft wishes it was as cool as. This is also where the unified communications industry is heading generally: mobile friendly, cross channel communication apps with unimaginable technical wizardry happening unseen in the cloud.

Believe it or not, Slack has been around since 2013. Basecamp even longer. ShoreTel recently announced the new ShoreTel app, replacing their old mobility client with a mobile friendly, cross-platform, cloud-based, messaging and VOIP collaboration platform. Microsoft (traditionally very slow to any new party) must surely arrive eventually.

This is in part because the generation that have grown up with WhatsApp and Facebook Messenger simply don’t see messaging and audio as separate realms, and are noticeably more open to the idea of a business application with something of the ‘look and feel’ of social media.

Merging the two makes excellent commercial sense for the unstoppable business behemoth that is Microsoft, and would park the tanks on several lawns at once.